Long before Roy Ellamar left Hawaii for mainland U.S. and landed in the Las Vegas limelight, and before Harvest by Roy Ellamar at the Bellagio earned a Wine Spectator Best of Award of Excellence, the chef had an important weekend dining ritual.

“When my son Tayden was around 10 years old, I was living and working on the Kona side of the Island and he was living on the Hilo side,” says Ellamar. “I would drive the 100-mile Hamakua Coast every weekend to visit with him, and along the way I would stop in Honokaa, where a man would be roasting huli-huli chickens on the roadside.”

With the mouthwatering aromas filling the car, father and son would head to the beach, picnic in tow. “We’d always be at the beach [on Father’s Day],” says Tayden, now 26, who joined Roy for a recent interview and has followed in his father’s footsteps—Tayden is a chef at the Grand Award–winning Joël Robuchon Restaurant, just down the street at the MGM Grand.

This Father’s Day, Ellamar shares his huli-huli–inspired Harvest Hawaiian-Style Roast Chicken recipe, and we offer 14 Wine Spectator–recommended rosés to pair with it. 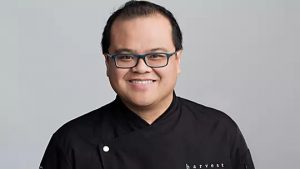 Courtesy of MGM Resorts International
Roy Ellamar started working in kitchens at age 17 on Hawaii’s Big Island; he moved to the mainland in 2004, where he earned his stripes at the Four Seasons Chicago and the Beverly Hills Hotel in Los Angeles. By the time Ellamar moved to Vegas in 2012, he was toying with the idea of pursuing the beverage side of the industry, but a position as chef de partie at L’Atelier de Joël Robuchon, which holds a Best of Award of Excellence, reminded him what he loved most.

“Working with the team that was at Robuchon, and every day pushing so hard—that really reignited my passion for cooking,” he remembers.

In 2015, he opened Harvest by Roy Ellamar at the Bellagio. The New American menu focuses heavily on seasonal, regional ingredients while incorporating a taste of Hawaii, which includes his own version of huli-huli chicken.

In Hawaiian, “huli” means to “turn around, or flip,” and at Harvest, Ellamar cooks the birds on a rotisserie viewable from the dining room.

Ellamar’s huli-huli brine includes brown sugar, chile flakes, cinnamon, mustard seed, soy sauce and more, and is boiled to release and incorporate the essential oils from the dry spices. He recommends straining the brine after boiling to remove seeds and flakes.

For the brining process (which should start the morning before cooking the chicken), let the brine completely cool and then make sure the chicken is fully submerged. Cover the container and set it to rest in the fridge overnight, but allow the chicken to come back to room temperature the next day before cooking.

Next, Ellamar turns his attention to the wine.

“When we opened [Harvest] we had a very global wine list,” Ellamar says. “Now we focus more on smaller products, a lot of American producers, and people that are doing things in alignment with us.”

To match with warm weather and the flavor profile of the brined chicken, Ellamar suggests going with a rosé—something like Château d’Esclans Whispering Angel from Provence, for example, is fruit-forward and fresh. “I think it pairs nicely with the brine and the chicken and the saltiness of the skin.”

For the Harvest Hawaiian-Style Roast Chicken:

1. In a large pot, heat 2 cups of water, salt, sugar and soy sauce over medium-high heat until the salt and sugar are fully dissolved. Add remaining spices (all remaining ingredients except the chicken, remaining water and beer) to the pot and bring to a boil for 2 to 3 minutes. Let the brine cool to room temperature. Strain and discard the spices.

2. When the brine has completely cooled, add the remaining water, beer and chicken, taking care to fully submerge the chicken. Wrap the top of the container with plastic wrap. Refrigerate overnight for 12 hours.

3. Remove the chicken from the brine, and with a paper towel pat it dry inside and out. This allows the skin to dry and become crispy when cooked. Return the chicken to the fridge and let it sit to dry (minimum drying time is 2 hours; maximum time is 12 hours). Leave the chicken uncovered.

4. Preheat the oven to 350° F. Place the chicken on a rack over a pan so that remaining liquids are able to drip off and the chicken’s skin can crisp. Roast the chicken for 1 hour and 15 minutes. Cooking time may vary depending on the size of the chicken—the bird is done when the internal temperature of the thigh reaches 165° F. Serves 2 (plus leftovers for a beachside picnic).